Only two years old, Clark was beautiful, smart, and playful… but she was dangerous. Sweet one moment she could turn in a flash becoming an intimidating animal. She was aggressive to all dogs and it was well established that she was highly predatory to other animals. Clark’s unpredictable reaction to people forced Ashley to live alone, although her dream was to join an artist’s cooperative, where she would be living in a shared community of people and a number of house cats.

Although it seemed that Ashley’s life was too complex for this dog to be a part, she was determined to save her relationship with Clark and after intense therapy and training Clark is now an integral part of the Trumbull Plex, an artist’s community, in Detroit. “I found an emaciated dog tied to a fence in a park in Philly. I brought her home and fell in love, and when she was back up to health, I discovered that she was severely aggressive and hyperactive. Although she was the most loving dog I had ever seen, her aggression was endangering those around her and herself. She began attacking my family’s dog, became territorial over me and food, and turned her aggression on me when I tried to control and discipline her. There were times I had to pin her to the ground while she tried to get at my throat. I put her through numerous training programs that had no effect on her aggressive behavior. Any shelter I could have brought her to would have put her down and no one would have been willing to take her. There was no solution in sight until someone referred me to Jim Lessenberry. When she completed the program I couldn’t believe the change in her. She is the same dog that I love but is completely obedient. She responds to my commands the second I give them. She walks off leash at my side and we can walk right by another dog. I bring her with me everywhere I can, and she is the most loyal and loving dog I could ask for.” 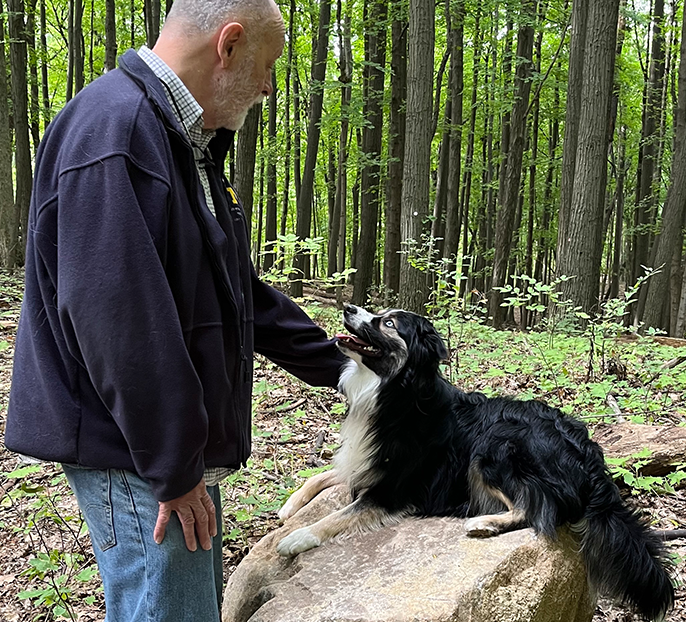